Buttonbush, (Cephalanthus occidentalis), is a native shrub that gets high marks for its usefulness to wildlife. It’s also a personal favorite because, well, it’s just plain so amusing! And what could be better than a plant that’s useful and entertaining at the same time?

Just look at that crazy flower! How many different connections does it bring to your mind? Here are some of its other common names: Honeyballs, Spanish Pincushion, Globeflowers, Little Snowball – and that’s before we even get into sputnik space and beyond.

Surrounding the spherical flower heads is a delicate fringe of pistils protruding past white corollas. You will occasionally see variations in the flower color from pale yellow to a very light pink. They are not only showy and long-lasting but also quite pleasingly fragrant.


In Bringing Nature Home, Doug Tallamy says, “Buttonbush is another of my favorites for the butterfly garden. Its ball-shaped flowers capture the eye, it does well in wet areas, butterflies fight to gain access to its nectar and it serves as host plant for 18 species of Lepidoptera in my neck of the woods.”

The Xerces Society ranks buttonbush as being of special value to native bees, and I often see bees mobbing the blossoms. Ducks and other water birds and shorebirds consume the seeds, and if the plant is in or near water, wood ducks will use it as a nesting site. The USDA also promotes the use of buttonbush for wetland restoration and erosion control.

The genus name Cephalanthus comes from the Greek words for head (cephalo), and flower, (anthos). Occidentalis, of course, just means ‘from the west.’ It’s native from Canada to Mexico, and from California to Florida and Cuba. Any plant with a range like that is almost certainly a tough character that will tolerate a wide range of soils, and buttonbush does. However, it is, in its native habitat, a denizen of the more moist areas, so keep that in mind when you are locating it in the home landscape.


Shallow standing water feels just fine to buttonbush, which makes it a good candidate for rain gardens and swales. Recent research has shown that buttonbush is a plant that is much more adaptable than its native habitat might indicate, but your best bet is to give it a moist site, in either sun or part shade.

Buttonbush has an open, rounded shape with glossy, dark, green leaves. In the wild buttonbush is commonly around six to twelve feet, with an average spread of six feet. If you need to keep your buttonbush pruned to fit a smaller space, you can cut it back it with no ill effects after flowering, which is usually in June. Or if you need to be more drastic, just whack its head off entirely (to maybe a foot high) and let it regenerate.

The flowers mature into hard fruits consisting of multiple tiny dark brown clusters of achenes (nutlets) containing two seeds. These persist for some time on the plant, but if you want to collect the seed, do so by late summer or early fall before they are eaten or dry up and succumb to harsh weather by falling off. The seeds can be planted with no pre-treatment, just keep them fresh. 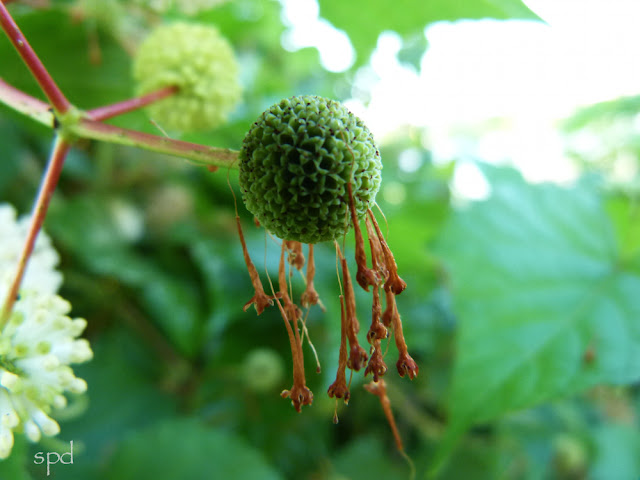