Editor’s note: this is part two of this series. Don’t miss part one of Viburnum Under Siege.

The accidentally introduced pest, viburnum leaf beetle (Pyrrhalta viburni) or VLB for short, can destroy a shrub in just a couple of years. Unfortunately it continues to spread through North America. So I am trying to learn more about it, hoping that we can protect the viburnums in our area. This is the information that I have gathered from the sites listed and from my own observations. It doesn’t look very encouraging. 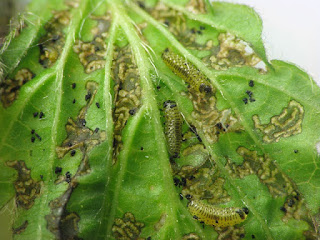 The grubs or larvae emerge from eggs early in the spring. They are yellowish or greenish, with black markings and can reach one third or a quarter of an inch in length.
They spend a few weeks feeding on the leaves by making numerous little holes between the veins. These holes are easy to identify. By early or mid June they climb down along the stems and bury themselves in the ground to pupate. When I searched for them in mid June, I found none, only the damage remained.

By the end of June or in July, the adults emerge and start feeding on the same shrubs, making more holes that look similar to the ones made by the larvae. The adult beetles are about a quarter of an inch long, brown, with a golden fuzz coating the body.

Females lay eggs on twigs, after chewing up a round hole. They cover a batch of about 8 eggs with a cap made of sawdust and their own feces. They can lay as many as seventy batches aligned in rows near the far end of a twig. The eggs spend the winter well protected against predators and the weather under this nasty mess. Their only serious threat to their survival is the crushing mechanism that many non-native viburnums possess.

Most native viburnums, such as arrowwood (V. dentatum) and possum-haw (V. nudum) are either very susceptible or susceptible to VLB. The only native ones that are moderately resistant are the nannyberry viburnum (V. lentago) and the blackhaw viburnum (V. prunifolium). On the other hand, many of the non-native species are very resistant. So I see our native plants being hit by a double whammy, first by the pest itself and second by nurseries selling “pest free viburnums,” meaning non-native ones.
The Cornell University site has a number of suggestions on how to fight this invasive pest starting with placing sticky traps around the base of the stems of shrubs in the spring to prevent the full grown larvae from crawling down to pupate. It is too late to do that now, so we will have to be ready next year.

The adults are active now, mid July, so I have been trying to collect them by shaking the branches, catching them on some white sheets underneath and dropping them in soapy water. I suspect that the numbers will grow larger in the next few weeks.

After the first frost it will be time to start inspecting the stems for signs of eggs and to prune and destroy infested twigs. They should be easy to identify thanks to photos in the mentioned sites. This is perhaps the most effective means of control, especially if your shrubs are relatively small. I fear that all these measures combined may not be enough to stop the advance of the VLB, particularly when there are many tall bushes among poison ivy and other shrubs; but we plan to do our best.
The sites listed also suggest some pesticides; but I haven’t considered those.
If worse comes to worse there are some soaps and oils that may be of help, especially in early spring when the young larvae are emerging from the eggs.

I hope that we can reduce the damage in our area so that birds passing by in the fall continue to find the nutritious berries of arrowwood and so moths also continue to find food.
I am interested in other suggestions. Have you detected this invasive pest in your gardens? I suggest that you look for the characteristic leaf damage and egg cases. Let us know if you find any.